Louis Vierne (1870-1937), a student of César Franck and Charles-Marie Widor, was organist at Notre-Dame Cathedral in Paris for 37 years, until his death at the console during a recital. The OrganScore edition covers the ’24 Pièces de Fantaisies’ and the six organ symphonies (to be published soon).

Louis Vierne’s twenty four “Pièces de fantaisie”, have been composed for a three manual organ and a pedal board. Published in 1926 and 1927, they constitute 4 suites of 6 pieces each. According to the composer, they are of “average difficulty” and their duration “varies from 3 to 5 minutes”. In practice, this depends on the performer’s tempo, and some of them can last up to 7 or 8 minutes. The OrganScore format is particularly suitable for these pieces, where hands may be unable to leave the keyboard during very long passages. The 4 suites are covered by 2 volumes. 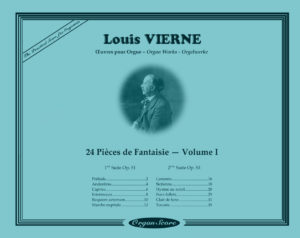 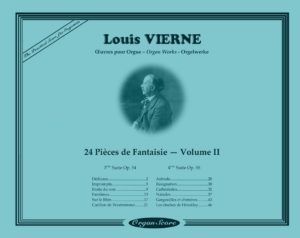