Following the path taken for J.S. Bach, OrganScore proposes Buxtehude’s complete organ works in three large-format volumes. The order of the works follows the BuxWV numbers (“Buxtehude Werke Verzeichnis”, compiled by Georg Karstadt). The first two volumes covers the free-style pieces, and the third one contains all the chorale works.

Editing Buxtehude’s organ work is a delicate task because we don not have access tp any holograph source of these works. The available manuscripts are all copies by eighteenth and nineteenth-century organists. These copies were mostly written in the modern notation system –the originals were probably in German organ tablature– and contain transcription errors such as:

In places where the music is obviously corrupted and no complementary source is available, the editor has to reconstruct the music by guessing at the original idea. Because of this, no modern edition can claim the genuine composer’s text.

The OrganScore edition is the result of editorial work based on both the edition by Philipp Spitta and Max Seiffert (1876, 1901 and 1939 release) and the original manuscript sources known to date.

As a consequence of the editorial choices, there is of course room for criticism or disagreement. Therefore, each volume contains a detailed critical apparatus with many musical excerpts. Even a non-French speaking reader can easily check the original sources’ contents. The critical apparatus refers to both the manuscripts’ the Spitta edition’s content, and explicits the decisions made to determine the definitive OrganScore musical text.

The works spread over three volumes and arranged order of BuxWV numbers. As for any OrganScore book, the organist will be able to play without having any page turn problem, with a very good readablity (check page on OrganScore readability). 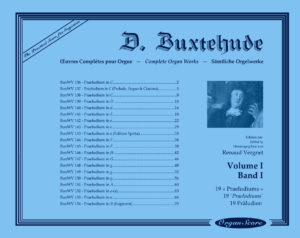 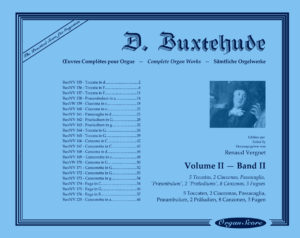 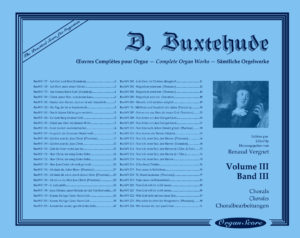